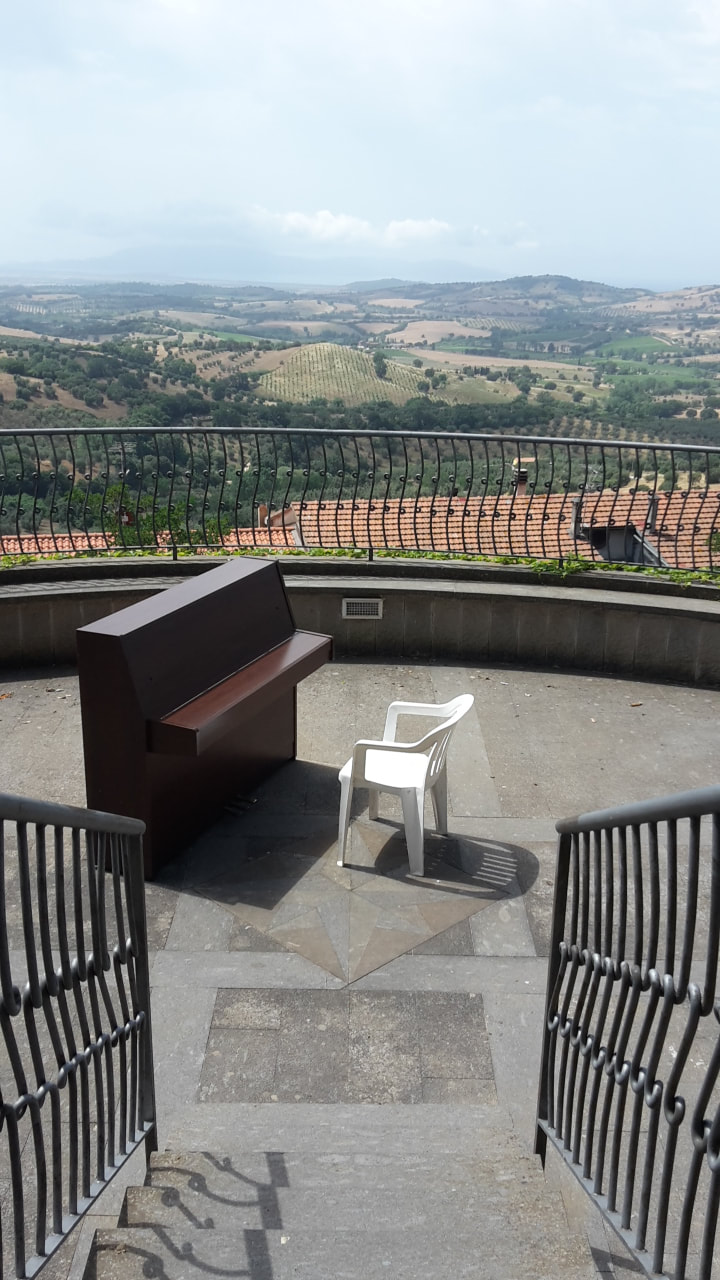 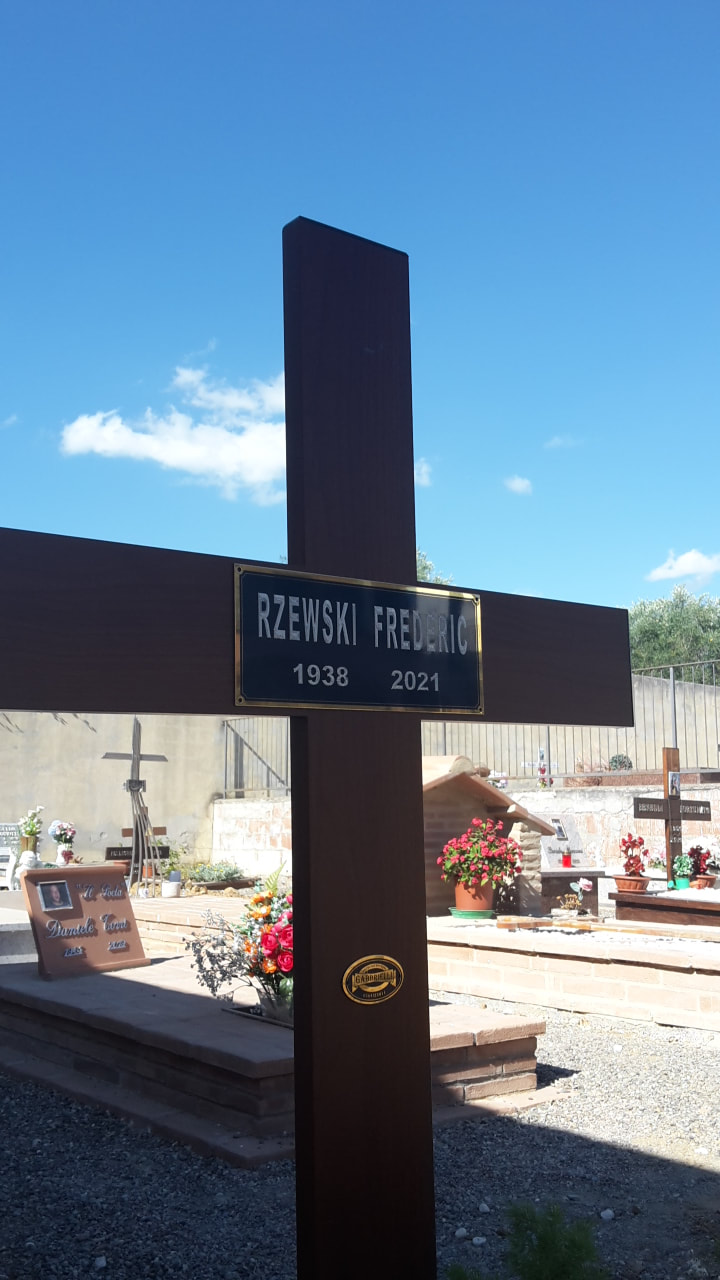 (Pictured here: Frederic's piano in Montiano and his grave)

The world has lost a prolific composer and pianist, and I’ve lost a great friend.

What are we supposed to do now with one less great composer around? With one less living piece of history? Without someone so deeply rooted in a foregone era but who also ensured until his final days that the pianist-composer-improviser is not a thing of the past but very much a thing of the present?

Reflecting upon Frederic’s life over the last few days has left me with a sense of total awe at how many things he was capable of achieving in his 83 years on this planet.

He was an incredibly prolific composer, who wrote a staggering amount of music in his lifetime. The number of pieces that have become standard repertoire only partially speaks to his entire oeuvre. He wrote one great piece of music after another over the span of half-a-century. From the early pieces like Les Moutons de Panurge, Jefferson, and Coming Together, all the way to the latest great works like his Songs of Insurrection or Dreams, history will catalogue Frederic as one of the most prolific composers of the 20th and 21st centuries, if not one of the most prolific composers ever. The popular pieces aside, there are hours upon hours and pages upon pages of music – mostly but not only for solo piano – that have hardly even been played. Just within the last five years, Frederic wrote an incredible amount of piano music. Large-scale cycles for solo piano like the Eight Nocturnes or the Six Movements will only start to be more widely performed soon, I hope. I’ll do all I can to make his music audible, as I know many of my pianist-friends and colleagues will as well.

As well as composing so much music and engraving the vast majority of it in his own handwriting, Frederic maintained a virtuosic presence in the world as a public figure. He was an extremely social person who gravitated towards people and strived to understand them. At the same time, he was capable of and willing to share his strong opinions. He actively communicated his world-view to the world. Strongly guided by certain principles and (as he saw them) fundamental laws that should govern humanity, he worked hard to make these a reality. This is presumably why he acquired the reputation as a “political” composer. It’s true that he integrated certain convictions into certain musical works in concrete ways, but this label was something he would never understand. After all, the majority of his works are completely apolitical in nature. The political aspect of Frederic’s personality was actually more in the human-to-human interactions he pursued and curated with integrity and respect. For this, he acquired tremendous language skills and maintained relationships with people across the globe.

It’s true that some people have said that he was a bad teacher. Not to me. He taught me a tremendous amount, but it took time and energy to acquire that knowledge from him. He was the perfect mentor for the decade-and-a-half that I regularly visited him. The main thing that I learned from Frederic is that no one can tell you how to do it as an artist. You have to discover how to do it your way. When I would play the piano for him, his music or otherwise, he would often say very little. We would talk about a detail or two that he found interesting and then he would say something like, “keep figuring out how to do it your way.” He often told me that I could play his pieces in a way that he couldn’t. This is a tremendous compliment to his music, of course. Great music shouldn’t be played in one certain way or another. It leaves room for the performer to approach it and find the hidden soundscape behind the score. Inevitably, every performer will make a great piece of music sound different.

Frederic himself was a brilliant pianist of course. He had an entirely unique approach to the instrument and certainly played music his way. He mainly played his own music, but his performances of Beethoven and Schumann in particular are extremely noteworthy. Like all great artists who work in a tradition in order to innovate it to keep it alive, he mastered the work of his predecessors as a natural extension of his own composing.

Frederic was driven by many interacting complicated forces, just like all of us and just like nature itself. Was this why he was such a contrarian? Well, why not? Prone to different temperaments, like all humans are (and especially great artists), Fred witnessed the world and understood its contents through differing shades of light, in always shifting contexts. He worked to differentiate things between polar extremes, as we all do, and he spoke in hyperbole to challenge his vis-à-vis in conversation to question their own views. He must have learned this from Tolstoy, one of his favorite writers. Good, bad: Frederic hated these words. He oscillated between them in the indeterminate and chaotic space where we all hover and where work gets done and art gets made.

Frederic was a family man. He may not have always been able to watch his kids grow up the way other fathers may have, because of the universal commitment all great composers make to pursue music at all costs. The touring lifestyle his performing demanded from him also led to major sacrifices. But I witnessed his abiding love for his children and also the way he would take to others and welcome them into his heart as if they were of his own flesh and blood. This is the deepest sense in which Fred was a real communist.

Frederic was the funniest person I’ve ever met. He was a born comedian. He naturally made people laugh and he enjoyed playing with the thin line between funny and macabre, between satirical and controversial. He made people laugh and sometimes made them cry. He told jokes as if they were written by Dostoyevsky, and told autobiographical stories as if they were jokes. There was one thing Frederic never was. Bored. And spending time with him was definitely never boring.

Frederic, you were a great friend and a perfect mentor. You’ve challenged us with the incredible life you lived to step up to the plate and do what we can to make the world a better place. I’m with you: the verdict is still out as to whether music can save the world. But if we don’t try, it definitely won’t.

What a life you lived, Frederic!

What a mensch you were!